Champion of the Barrio | The Legacy
Buryl Baty was a winning athlete, coach, builder of men, and an early pioneer in the fight against bigotry. In 1950, after serving in the second world war and then quarterbacking the Texas Aggies during the glory days of the old Southwest Conference, Baty became head football coach at Bowie High School in El Paso
Champion, barrio, football, high school, Buryl, Baty, Texas, Aggies, A&M, coach, Bowie, El Paso
15397
page-template,page-template-full_width,page-template-full_width-php,page,page-id-15397,ajax_fade,page_not_loaded,,qode-theme-ver-6.1,wpb-js-composer js-comp-ver-4.3.5,vc_responsive

CHAMPION OF THE BARRIO

The Legacy of Coach Buryl Baty

Buryl Baty was a winning athlete, coach, builder of men, and an early pioneer in the fight against bigotry. In 1950, after serving in World War II, quarterbacking the Texas Aggies during glory days of the old Southwest Conference, and being drafted by the NFL’s Detroit Lions, Baty became head football coach for the Bowie High School Bears in the Segundo Barrio of El Paso. Coach Baty quickly inspired this all-Mexican American team of athletes from the south side ghetto with his winning ways and personal stand against the era’s extreme, deep-seated prejudice–to which they were subjected.

By 1954, the Bears were poised for a third championship…until an unthinkable tragedy turned their world upside down. Decades later, the school and its former players memorialized Coach Baty’s legacy by dedicating Bowie High’s stadium in his name, and inducting him into the El Paso Athletic Hall of Fame.

In this poignant memoir, R. Gaines Baty also describes his journey to get to know his father, and learning from him. Coach Baty’s life story is portrayed from the perspectives of nearly 100 individuals whose lives he touched, in addition to many news reports and other documented facts. NFL Hall of Famer Raymond Berry provides a heartfelt and relevant foreword.

A university professor labeled this book “an important and historic piece of work.” It is also a moving story of leadership and triumph over hardship, over discrimination, over tragedy, over one’s self.

Champion of the Barrio: The Legacy of Coach Buryl Baty is published by the Texas A&M University Press. It is the first book in their new Spirit of Sport Series, sponsored by James C. and Debra Parchman Swaim, Nancy and T. Edgar Paup, and Joseph Wm. and Nancy Foran.  See purchase options below. 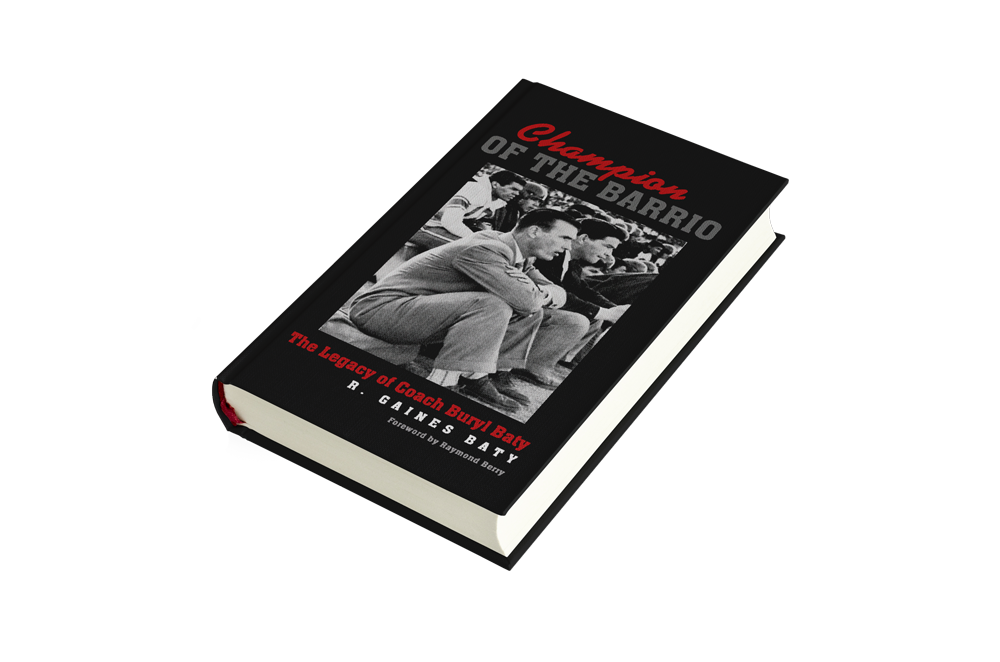 AVAILABLE FOR PURCHASE AT: